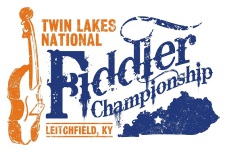 The Twin Lakes Fiddle Festival honors several musicians have played a vital role in Fiddling in Grayson County at the contest each year.

The Senior division trophy will be named the “Herman Alvey Trophy” in honor of Herman Alvey, one of
Grayson County’s finest fiddlers and a multiple winner of the KY State Senior Championship.

A special award, the “Bud Meredith Showmanship Award” will be given to honor Bud Meredith, one of Grayson County most famous fiddlers who competed at the national level.

The Dancing trophy will be named the “Leo Mudd Trophy” in honor of Leo Mudd, one of the coordinators of the KY State Fiddler Championship and a longtime supporter of music and youth in Grayson County.

The Grand Champion trophy will be named the “Jodie Hall Trophy” in honor of Jodie Hall, who started the Kentucky State Fiddler Championship and was a musician, luthier, author and vital support of music in Grayson County.